Are walkable carless cities just a fantasy - or could they become an economic cash-cow?

Are walkable carless cities just a fantasy - or could they become an economic cash-cow?

There is real demand from real people for carless cities – or walkable cities (it's really demand for both). I've known so many people who hate cars and would love if they didn't have to own one. There is of course the climate change issue. But then, there's also the economic issue. Ditching the automobile would save the average car-owner $9,000 a year. And there's all types of other economic and health benefits that I've outlined many, but not all of, in the original article. To prove the point that interest is real, consider that Tracy Gayton is leading the Piscataquis Village Project, a carless town planned for Maine, and has raised $440,000 towards a 2 million dollar goal. Their plan is a little different from mine in motivation, but not by much – the key element of walkability is the same. But to get the ideas of A radical plan moving, there need to be more specifics.

So, I've looked at a few areas in Fairfax Countythat might be suitable sites, and a couple strategies seem viable. Each area would demand it's own strategy of course, but generally speaking, there are 2 paths: build on an already developed area, or build on an area that's less developed.

At the extreme end of already developed land is a city, like Washington, D.C., and in that case, almost nothing needs to be built, it's just that the people and businesses living within the city are all in the wrong places and there aren't enough small local commercial establishments, especially grocery stores. Washington and other cities are already making moves towards becoming carbon-neutral, and making it harder to own a car and easier to not own one. Perhaps one of these days, city planners will just breakout of the old preconceptions and start changing the codes so real walkable neighborhoods can emerge.

At the other end of the spectrum are rural areas, like Tracy's plan which would build on open land. But somewhere in the middle is the vast sprawling suburbs of America, and this is what I've focused on here: Fairfax County suburbs. These areas are mostly free-standing houses with some areas of higher density “nodes,” usually centered at the intersections of major roads. Turning one of these nodes into a mini-city is certainly an idea, and that's what I looked at with Option #1, which is Fairfax City. 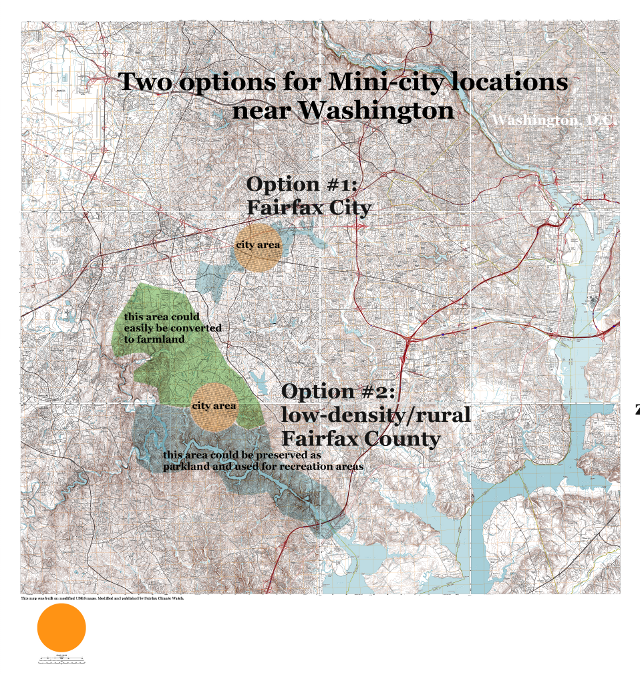 There are several legal and logistical positives about Fairfax City. It's politically independent of the county, and would therefore have an easier time overcoming bureaucratic opposition to the idea. Because it is independent and so small, with only about 20,000 residents, it would also stand to benefit enormously from a successful development into a mini-city. Of course, the people would have to be convinced to try it, and they would have to understand that it would come with risks – success couldn't be guaranteed.

However, because Fairfax City is already humming along commercially, and has a large number of established businesses to meet local needs, the change-over could really be an incremental process that would lower the financial risks and enable flexibility. For instance, the local codes could be changed to enable carfree apartments, and incentives provided to encourage smaller-sized grocery stores to set up shop near those apartments. And the habit of having all-residential or all-commercial in a building could be stopped, opening up first floor retail space anywhere there were already-standing apartment buildings.

On the downside, Fairfax City is surrounded by too much development to expect farming or a complete encircling of open space (as envisioned in the original radical plan concept, and as useful for local food system efficiency). I've identified 2 areas that could serve as parks however, and already have some small parks within those areas. A number of houses would have to be bought and removed to see that size of parkland go in. The interior of the mini-city could however, have smaller open areas and parks. And rooftop gardens would be a must.

The next area I examined here was an area that is somewhat rural, but mostly free-standing homes on large lots of property. Acquiring the area would be more difficult in all honesty, because the people who live there now are unlikely to give up their land to alternative developments. But I developed the idea nonetheless, because there may come a day when climate change induces an extension of government power, as demanded by the people, to make radical and swift changes. Under such a situation, eminent domain could be used to purchase the land, without requiring any consent from the owners. A more optimistic possibility is that the owners would be carried away with patriotic fervor, along with the rest of the country, and willingly sell their land for the good of all. The plan for this area was carried out assuming a scenario along those lines, regardless of whether the land was freely acquired or not.

This suburban area has several benefits: it's right on the edge of a large natural preserve along the Occoquan Reservoir, so it already has access to a lot of open land. The site for the mini-city itself and the surrounding areas are so sparsely developed, that removing the existing houses to put in parks and farms would be fairly easy and not all that destructive in terms of material loss. Several of the existing structures inside the mini-city site might even be able to remain standing and become structurally incorporated.

There are other possible sites in and around Fairfax County that might be good spots for potential future mini-cities, like Warrenton. It's similar to Fairfax City, about 20,000 residents, politically independent, and already on a small plot of land – most of all it's surrounded by existing farmland – a huge plus. I'm sure there are plenty of other potentially great sites around the country too.

As working remotely and videoconferencing continues to become more accepted, more and more people won't need to go into the office daily, or perhaps even weekly. In such cases, a walkable, carfree mini-city would be an ideal place to live – if not for the lifestyle, then for the savings of not owning a car. For a couple who would otherwise have owned two cars, the savings would come to $18,000 a year. This is really just a mind-boggling number – but it's based on the latest AAA report, and my own records show that my own car costs are in agreement with that figure.

So, I can see these mini-cities developing as a way for small local municipalities, like Fairfax City or Warrenton, to attract more residents, tax dollars, and commerce. Plus, having smaller-scale local businesses would be better for that municipality's economy and general economic well-being. Smaller-scale businesses in such a small community would mean that incomes would be more evenly distributed; for example: as opposed to a manager and a few assistant managers of a large grocery store taking in all the good money while the rest of the employees get a few dollars above minimum wage. Plus, with most of the residents working primarily in the mini-city itself, money would tend to stay circulating locally. With city sizes of 50,000 or higher, interesting and perhaps unique local entertainment would develop. Indeed, there would be many exciting social and economic developments.

But what about the size, is this really feasible? At the area I've laid out for these two options here, living in the middle of the city would mean that almost everywhere could be reached on foot within 15 minutes. Living on the edge of the city would mean that about 1/3 of the city could be reached in the same amount of time, and most of the city reached within 30 minutes of walking – which is too far from my perspective. So if people wanted to live on the edges of the city, this would limit their transit ability. However, bikes, electric taxis, Segways, or other similar devices could be used to cut transit times in half or even more. Also, there could easily be an electric trolly running through the city. Adding a few diagonal avenues that cut directly to the heart of the city would reduce transit times, but not greatly. Another obvious possibility is to reduce the size of the city, which would be fine. 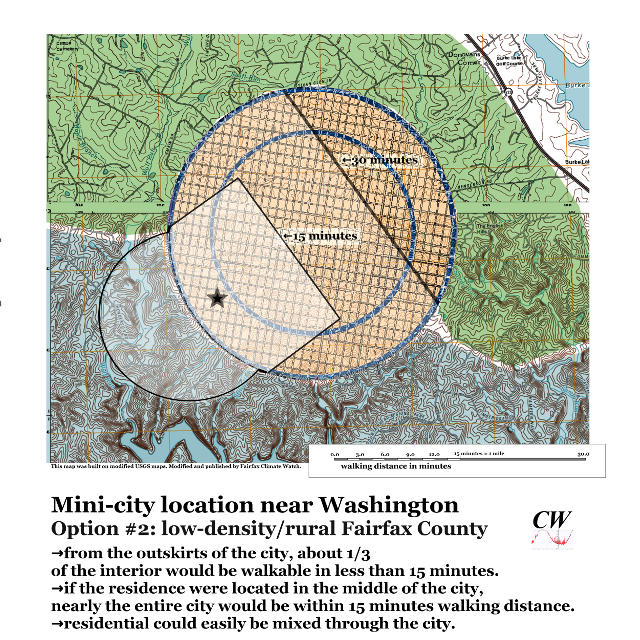 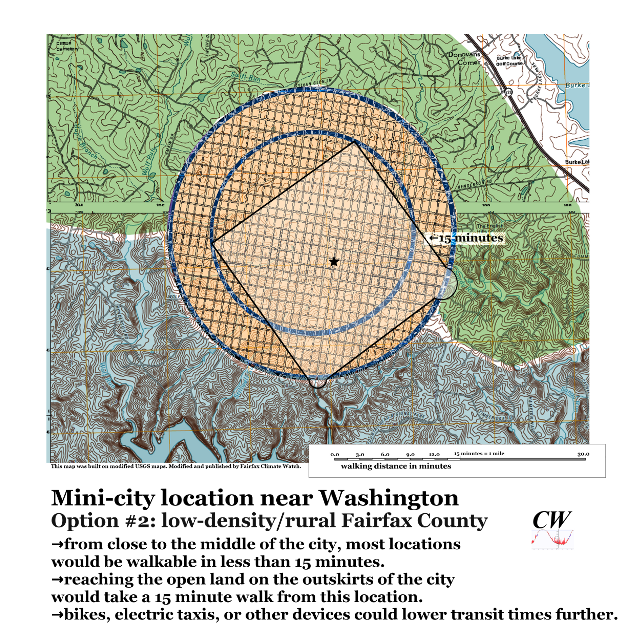 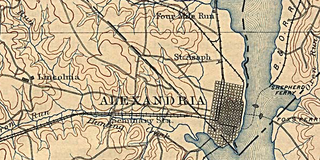 The city pictured above would have about 648 city blocks. The inner circle and outer ring that I've marked off are both equal in area; each with about 324 blocks. Each block size is modest, at just under 100 meters in length (about 300 feet). The layout is adopted from the street grid for Old Town Alexandria, which was designed before automobiles came around (see right, a USGS map showing the same grid for Old Town Alexandria in 1894 as still exists today).

Each block would have about 36 unique addresses per block, averaging 9 on each side. For residences, this would translate to fairly large living conditions and an average of 4.3 residents per address if half the city blocks were residential (although I do see many areas having shops and stores on the first floors). with 4.3 people per door and that 50/50 split (or equivalent), the population would be about 50,000. At this population level, residences would be about 2 stories tall on average, and still have room for lush courtyards or backyard gardens tucked in the middle of many blocks. In the spirit of a radical change, rooftop gardens on nearly all buildings would create a dramatic impression, as well as provide a valuable enhancement to quality of life and property values.

All in all, this idea appears increasingly feasible, and some new avenues for bringing it to reality are developing. Most importantly, the incentives are already in place in the form of large automobile cost savings and other savings and benefits. Also, the demand is in place from people who would like to live in a walkable, carfree area. And finally, trends are moving towards more telecommuting. One thing that might get a carfree mini-city really going here in Virginia, is if several companies from the private sector committed to the idea and worked with a local government to established offices in a mini-city, while also ensuring that they would have employees to fill those offices who wanted to give the car-free idea a go. A government commitment to the same would be less reliable, as political opposition or budget cuts could pull the entire funding out without much notice. With some of the local small municipalities that are already humming along, like Warrenton, a commitment of even 1,000 jobs could be enough incentive to get the project started.

yes, a lot of people don't like public transit. For one things, it often takes a long time. I know for me to commute into DC, I'd need to set aside about an hour and a half to get from my house to destination.