« Battery exchange stations: an easy way forward for electric cars | Main | What do camels, caves, and the cryosphere have in common? »

This summer could be lights out for the Arctic sea ice.

Above is the ice thickness, as estimated by the U.S. Navy for March 3rd of 2011, 2012, and 2013 (The dates posted on the maps correspond to the date the analysis was performed). Click for larger view.

This map shows several troubling trends which point to a possible ice-free summer Arctic Ocean as soon as this summer, including unusually high heat retention in shallow coastal shelves where large stores of methane gas wait to be released if temperatures climb too high.

The angle of the Earth to the sun is now shifting, bringing sunlight back on up north - soon to start heating and melting the Arctic, as it does every year (aka summer for the northern hemisphere). But this time is different.

As the map shows, substantial thinning around the edges of the Arctic Ocean basin indicates significant heat retention in those waters. Plus, the thickest part of the ice, 3 to 5 meters, is just barely clinging to existence along the northern coast of Greenland. These navy maps only go back to 2011, but older observational data prove that sea ice thickness used to be much, much thicker. In fact, the sea ice has been thinning for decades now, but since 2007, the decline has gone from first to fifth gear. What this map shows is the last gasp of Arctic sea ice, at least for the summers.

Below: sea ice concentration (how much ice area there is as a percent of ocean area) 1982 vs. 2012, for September 15th. Images from Cryosphere Today. Click for larger view: 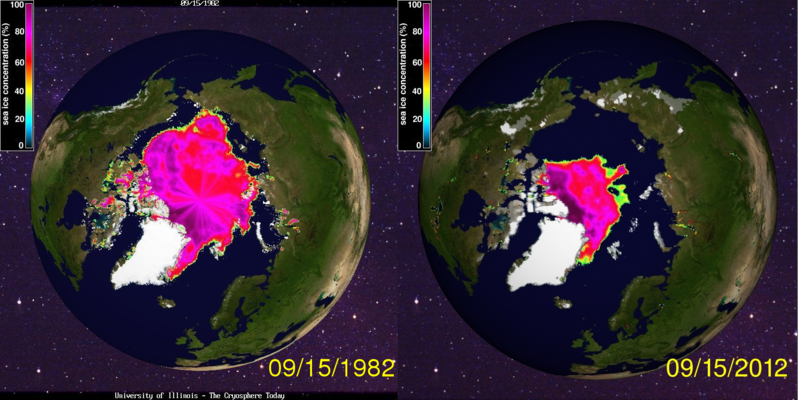 Over the coming months, ocean currents and wind will push the decaying ice around, further accelerating the melting, and leading to more solar heat absorption by the ocean waters. If any ice remains by September, it will probably end up pushed up along the Greenland coast again. In the winter, the ocean will ice over again, but only a thin layer will form, meaning the ice cover will melt even earlier in the season next year.

By all accounts, the Arctic is in big trouble. The ramifications are still being worked out, and are not entirely clear.

But really, "not entirely clear" is just a euphemism. And, "big trouble" is really an understatement. If I were the type to panic, I would be panicking now. Those movies, where the gates to other universes (violent, hostile universes of course - what other kind are there?), or the gates to hell, etc. have been somehow left open ...those movies take on a new meaning in the context of this problem.

I do not encourage you to panic however, and remember, panic rarely accomplishes anything except for helping to get yourself physically away from something hostile. That won't work here, unless you have a spaceship and an open invite from another planet.

What this means practically speaking, is much more insidious than a sudden global apocalypse. Apocalyptic or insidious - either way, the issue calls for attention.

In a best-case scenario, the nosediving arctic sea ice means that going forward there will be:

If a worst-case scenario unfolds however, there would be:

This is serious. National, local, and individual security, prosperity, physical and mental well-being are all in jeopardy.

Halting your own personal contributions to global warming, or even offsetting your impact by planting trees for example, is commendable, but not sufficient in and of itself. What is required first and foremost, is acceptance of the reality. This acceptance must be community-wide, and nation-wide. Consider that those who do not know about the danger will make poorly informed decisions, placing their hard-earned assets and investing limited time in endeavors which are doomed to failure, destruction, or obsolescence.

If possible, I suggest positioning yourself away from those who are blind to the reality of climate change, while continuing to inform yourself. If your business competitor is unaware of the risks, you may be able to expand into his customer base when he's set back by the various primary, secondary, or tertiary impacts from climate change which you saw coming. Or, if you are able to convince your family members or friends not to buy that beach-front house, for example, you may not have to feed and shelter them when that house is destroyed by a storm or taken by rising sea levels.

If you're still wondering why one little map means so much, consider the following: there are several feedback processes in the climate system, and the decline of the Arctic sea ice is going to impact one of the biggest, the thawing permafrost. The other big one is methane hydrates, which is possibly much bigger than all the others. At this point however, we do not know enough to constrain the uncertainty around methane hydrates. This leaves a large range of additional warming that could result depending on if they are released, and if they are, then on how much, how fast, and in what way they release their carbon.

Below: an alternate version of the same maps above. Click for larger view: 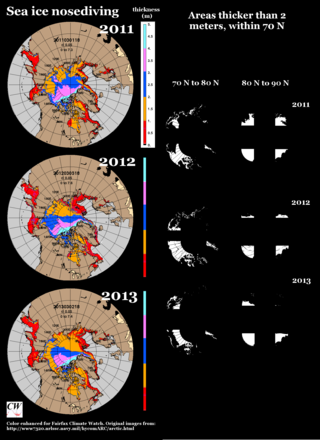 More info and often lively discussion can be found at The Arctic Sea Ice Blog.

Arguments for geo-engineering to slow the warming of the Arctic (or possibly reverse it) can be found at the Arctic Methane Emergency Group's web-site.

As usual, human emissions - if they keep rising, will make a worst-case scenario more likely. If on the other hand, emissions stop rising and then fall ASAP, the best-case scenario will be much more likely. A recent bill in the U.S. Senate, would adopt (with slight modification) the proposal of James Hansen, to tax carbon pollution at the source - that is the fuel - either at the point of extraction (if within the U.S.) or at the point of import. Proceeds (3/5 of them, anyway) from this tax would be distributed to American citizens, on an equal basis. Most of the rest of the proceeds would go to energy efficiency modifications to existing buildings. The bill in it's original text is here: http://beta.congress.gov/bill/113th-congress/senate-bill/332/text
and I strongly encourage - you - to support - this bill. Call your Senator's office, call you Representative's office. Write them an email. Write them a letter. Then, if you've got more energy, contact your governor, your state officials, your local officials, and even the town dog-catcher.