"a comprehensive and integrated United States research program which will assist the Nation and the world to understand, assess, predict, and respond to human-induced and natural processes of global change."

But, leaving aside what's been known for some time now, this new draft report (released for public comment) takes a more aggressive stance on the dangers of climate change than previous US federal reports - or the IPCC reports. So this is moderately positive news.

The changes are broken down over 4 different scenarios, called RCP's. RCP 2.6 represents the least warming and assumes that emissions essentially come to a sudden halt - a steady 70% reduction of emissions by 2050 compared to present emission rates. Such a reduction is considered highly unlikely and essentially equivalent to "sudden halting."

The amount of CO2 in the atmosphere essentially stays the same once it's emitted and reached equilibrium with the ocean (after about a year), so stopping emissions cold-turkey in 2050 won't achieve the same reduction in atmospheric CO2 levels as a constant reduction between now and then. Emissions must stop ASAP if we want to avoid turning a sizable portion of the US into desert (see graphs below).

RCP 8.5 is the worst scenario examined, and assumes that emissions continue unchecked. Question: have CO2 levels been rising faster or slower lately? Answer: faster (see chart below). Yet, many of the charts, figures, and data blurbs published throughout the new draft report are based on the less extreme scenarios - in spite of the trend towards increased emissions and increased CO2 growth rates. Most concerning to me is when news outlets report these data blurbs without mentioning which scenario the data is based on. That lets people get the impression that we're on a less extreme trajectory, and thus action is less urgent. 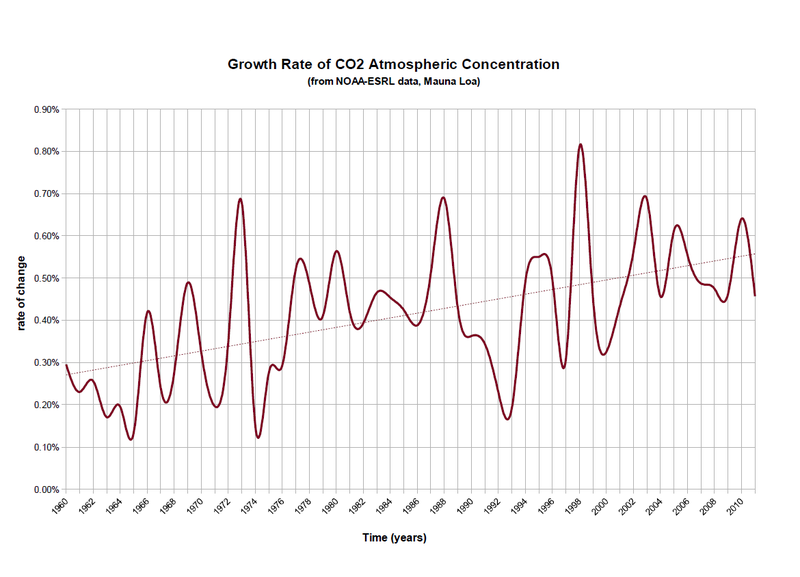 Above: Commitments to cut emissions have now been made spanning multiple decades, yet the chart above shows no reduction in annual growth rate of CO2.

If the RCP 8.5 scenario of unchecked emissions does become a reality, the report says that temperatures over most of the US will rise by 9ºF to 15ºF on an annual average basis by 2100. On a monthly basis, temperature rise comes out differently from annual average though, typically with fall months showing the biggest increases in average temperature. I've used a climate model (GCM GISS Model II) to reproduce similar warming as outlined in the RCP 8.5 projection of the report, and I've interpolated what local temperatures would look like during a simulated year between 2071 and 2099 for 1) Washington, D.C., 2) Sacramento, California, 3) Wichita, Kansas, and 4) Portland, Maine. Above: The nation's capital if RCP 8.5 projections come true. From the start of July until the middle of September, the daily high temperature rarely fails to cross 100ºF; only 4 days have low temperatures below freezing. 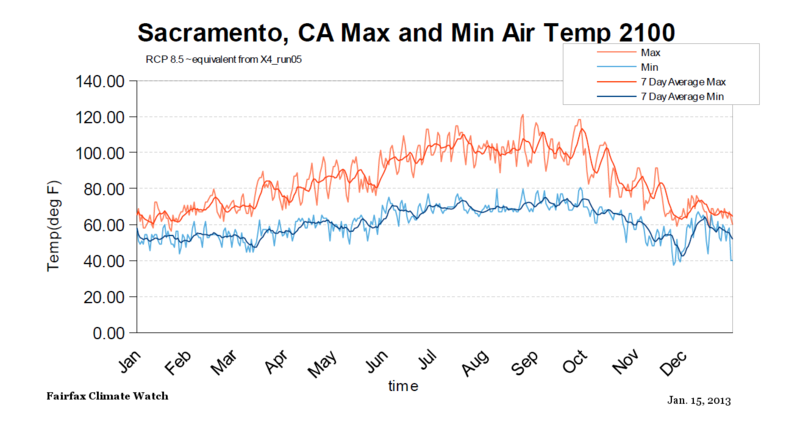 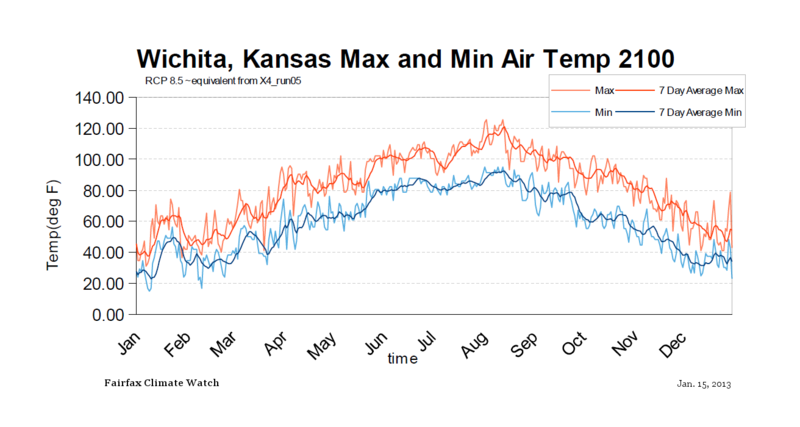 Above: Like other areas of the US, Kansas will become extremely hot in the summer months if emissions continue; winter however, will still see some freezing temperatures, but not much. 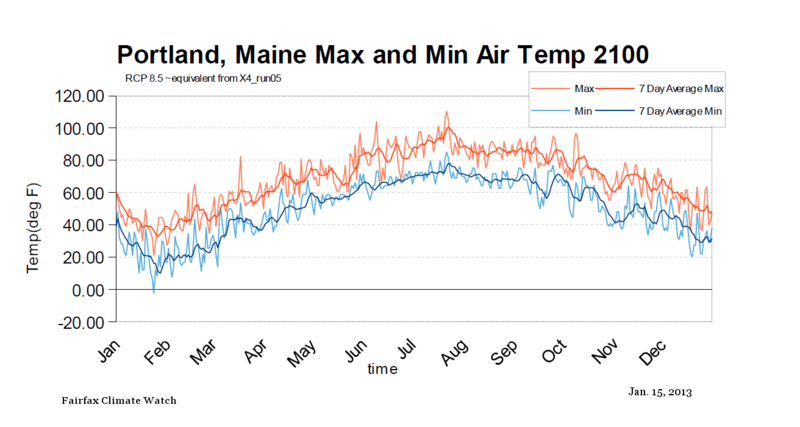 Above: Maine winters - even in coastal Portland - have always been cold and long. If emissions trends continue, Portland will see its weather become like Washington, D.C.'s is today: only a handful of days with below freezing temperatures for a full 24 hours. And indeed, in this simulated year, highs are in the 60's during November.

London and Athens temperature change by 2100. Both show a smaller increase than the US areas above, and a more evenly distributed warming influence across all the seasons. Greece, under several projections is set to become extremely arid in the coming decades. England meanwhile, will be subject to increasingly erratic weather as the Arctic melts down and the Gulf current wavers. 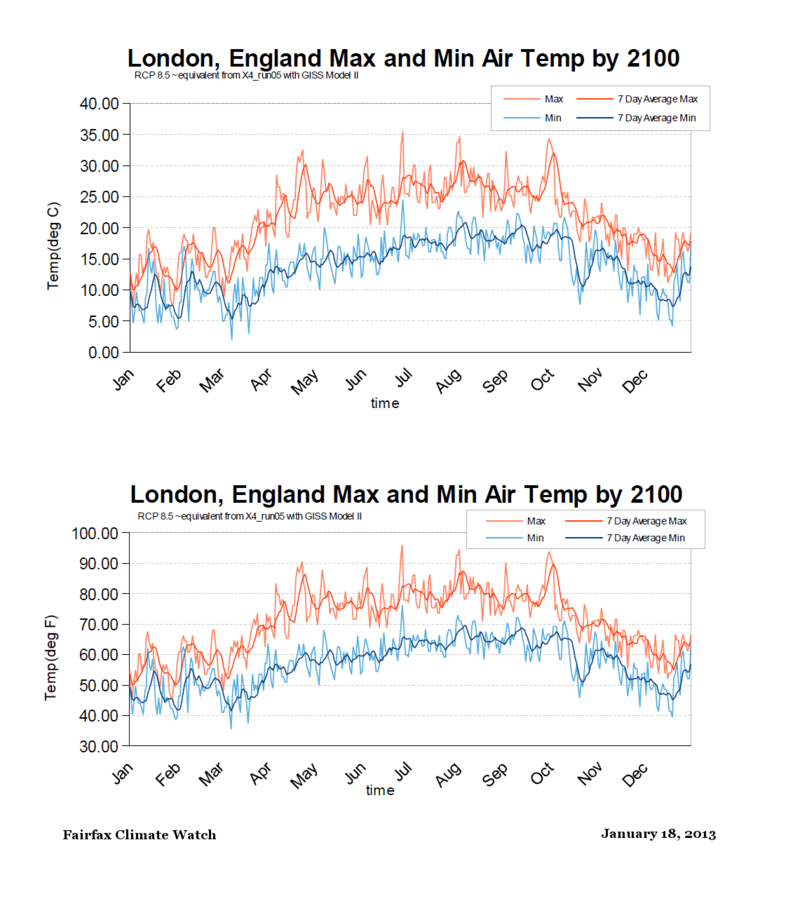 MORE: Dallas, Texas - by 2100, temperatures will be like Death Valley. Will Dallas survive? Is adaptation possible or will there be an exodus? And what impacts will there be on other regions?