« Temperatures are rising all around us: looking at 5-year trends around the world | Main | warming, ocean depth, and methane »

On January 17, 2013, Jeff Lukas, the Senior Research Associate of Western Water Assessment at the University of Colorado, gave an hour-long presentation at the most recent Weather and Climate Summit. The take-away from his presentation is this: droughts will be getting worse, no question about it. Cause: climate change. Time-frame: already started. And a potential megadrought, a phenomena that hasn't reared its ugly head for at least 150 years, poses a real and serious risk that needs to be planned for. Indeed, on an individual basis, it seems likely that those who get ahead of the curve will fare much better than those who bury their heads in the sand on this issue.

Megadroughts, are generally considered to be periods of 20 years or longer where continuous, or mostly continuous extreme drought covers a very large area, typically about 1/3 of the lower 48 (US states). And they're as bad as they sound - maybe worse.

If such a drought happens, the Colorado River's flow will drop drastically. The Bureau of Reclamation, which estimates that 25% of the US food supply is grown using Colorado River water, has already done a study to simulate a megadrought; results: Glen Canyon Dam hydro plant would have to stop generating power for about 20 years (two separate stretches of 10 years during the simulation). Both lake Mead and Lake Powell would see water levels drop by about 100 feet. Below: a slide from Lukas' presentation showing the simulation results.

Jeff Lukas explained in his talk that there have been times in the past 1,000+ years when drought was so bad that the Colorado River (which supplies both Lake Mead and Powell) flowed at 25% below its current flow rate. And that very low level of flow was sustained for decades. Lukas says that such a scenario is definitely possible today. In fact, he says it is such a high risk that it needs to be planned for.

For those that don't know, the Colorado River is already maxed out. The Southwest has seen some of the highest US population growth over recent decades, and coupled with farming demands, the river water is nearly all spoken for. According to a report by the Western Resources Advocates, this is the supply and demand relationship: 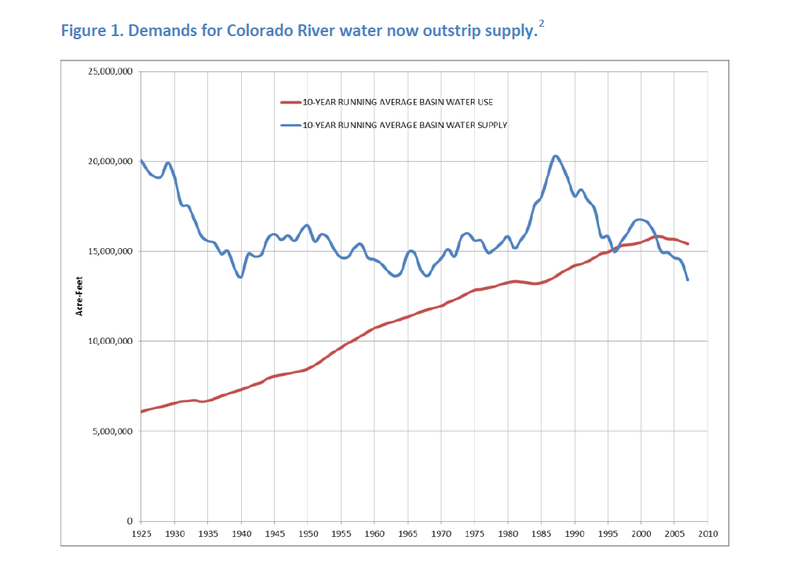 During Lukas' presentation, he cited research that used a hydrological model to simulate the Colorado's flow in the coming decades if global warming continues, as we now reluctantly expect. That research shows a loss of an additional 1.5 million acre feet from the Colorado's flow by 2050. And that estimate could be too optimistic. Those numbers are only as good as the assumptions used to produce them, those assumptions are based on general circulation models of global climate that produce temperature outputs for regions a middle-of-the-road climate change scenario (between RCP 4.5 and 6.0). Those climate models exclude many positive feedbacks that could kick in as warming progresses. If the climate models are too conservative, or just off in some unexpected way, and the interior of the US warms up beyond what they've projected, then the hydrological model results will likely be too conservative as well. Considering that the water budget for an area like the dry Southwest is already very delicately balanced and subject to big swings from year to year, this is a major weakness in relying on models alone to construct any kind of an outlook.

Fortunately, Lukas doesn't rely on the models. Instead, he uses them as a guide, which is what he should do. He concludes that drought is seriously underestimated as a severe threat - even if a megadrought doesn't develop in the near-future. Because of warming he says there will be more drought than we've ever seen before. And the droughts that would otherwise be moderate will now be severe - intensity will ratchet upwards with temperature. He also says that trends of the past several years are worrying when compared to the record that dates back to the year 750.

On their own, recent trends are cause for alarm that a megadrought could be on its way. In the past, megadroughts have been associated with above-normal warmth in the northern Atlantic and cooler-than-normal conditions in the eastern tropical Pacific (i.e. La Nina conditions). The northern Atlantic has seen record breaking temperatures in the past several years, and climate models indicate that the sea water there could consistently warm faster than most other areas of the world's oceans as climate change continues. The La Nina conditions usually come and go every few years, and are somewhat difficult to predict - but the last two years have seen La Nina conditions, which continue to present (although there has been some weakening, and forecasts give nearly equal odds to El Nino forming in 2013).

If a megadrought does unfold, past episodes may be a guide to the future. Lukas outlines a few of the effects that have been uncovered regarding past megadroughts: sand dunes forming in western Nebraska (i.e. no plants, just sand), more frequent wildfire, and rapidly dropping lake levels. One consequence that Lukas didn't talk about was how drought-killed plants stop pulling CO2 out of the air.

Right now, the dams and reservoirs along the Colorado can capture and store runoff, even from severe rainfall events, but only up to their maximum storage capacity, which is around 60 million acre feet, or about 4 years worth of water demand. Groundwater can be pumped up (i.e. wells) in many places, but that resource is already in sharp decline.

Clearly, if demand were lower, the problem wouldn't be nearly as bad. But as it stands now, just a few years of bad drought and high temperatures put Lake Powell and other sites at record low levels

The report by Jeff Lukas was not the first warning of megadrought. In fact, a recent report by several drought experts projected the same: more drought, worse drought, and the potential for megadrought (listen to audio about that below). Although the West and Southwest are the primary areas of impact, damaging drought could extend as far as the Great Lakes region and perhaps even into the Southeast.

In the audio clip below, there is a quite a bit of scepticism voiced by some callers - one of the main points that comes up (and often gets raised by the public) is that scientists predicted a coming ice age just a few decades ago (in fact, the climate was cooling overall for the past 2,000 years, until a sharp upward spike in temperature started, which coincided with the rapid onset of fossil fuel use), before they predicted global warming. Other conflicted viewpoints by the public say that the change required to adapt is too expensive, more than the expected costs. Such viewpoints are mostly based on psychological resistance to accepting inconvenient truths. In some cases, these views are simply based on limited exposure to the important news plus a poor understanding of science. But these people will be forced to accept changes whether they want to or not. If they ignore the risk, they will be steamrolled by the change - they will be the ones who buy their neighbors farmland at what seems like a great price, only to see their investment turn to sand.