Alarming Antarctic warming confirmed; 10 feet of SLR coming into focus, other causes could be even worse

Antarctica has been warming much faster than thought. David Bromwich and Julien Nicolas, both of Ohio State University, have reconstructed the West Antarctic temperature record and concluded that a rise of 2.4±1.2 °C has occurred between 1958 and 2010.

This confirms a borehole analysis that showed the same warming trend. But the borehole data had been questioned and seen as unreliable.

The reconstructed record is from a single station, Byrd, which has the most extensive temperature records for Antarctica.  Previously, the Byrd record was not being used because of several problems: gaps in the data series, different instruments had been used for collection, and a computer issue. Bromwich and Nicolas have gone back and reconstructed those gaps using reliable methods, calibrated the different instruments, and fixed the computer problem.

The new data shows that warming has been especially pronounced in the summer; most of the warming has happened since 1980 which is when warming around the globe also kicked into a higher gear.

The likelihood of large surface melt events over West Antarctica can now be said to be rising significantly. More data would be helpful, but what little we do have confirms the trend of rapid warming at both poles.

Quantifying the process of remains out of reach for now - scientists have yet to uncover the hidden mechanics of ice melt on the enormous scale of polar ice sheets. So other than saying, it's a problem and the trend is in a bad direction, no one can reliably predict when exactly a major disaster could strike.  Nevertheless, all signs do indeed point to disaster.

Some scientists, like James Hansen have said that ice sheets could start to disintegrate in a self-reinforcing cycle as a result of global warming, raising sea levels by 5 meters or possibly much more within 90 years. Such a rise of sea level (5 meters) would mean most of the world's cities would lose much or all of their land to the oceans. The biggest cities around the world are coastal, and have elevations from below sea level (i.e. New Orleans in the US and Rotterdam in the Netherlands) to barely above it.  And that's not mentioning all the roads and other infrastructure in low-elevation areas.

While this result is alarming - and is yet another in a long line of "climate change much worse than thought" discoveries - the biggest area of concern for the Antarctic ice is actually from beneath the West Antarctic ice shelf.  As the diagram below shows, a shelf is where a huge ice sheet extends over the ocean. Much of the shelf is resting below sea level, essentially sitting in the ocean. The concern is that a so-called "non-linear disintegration" could happen as warming ocean water cuts further towards land under the ice sheet. NASA climate scientist James Hansen has highlighted this non-linear possibility many times in the past several decades. If a large portion of the shelf breaks off, as happened with a smaller shelf (the Larsen shelf) in 2002, the whole mass could break into many smaller pieces, and over the course of perhaps just a year or two float away into the ocean. While the ice would eventually melt completely (although it could possibly float as far as the equator first), sea level would rise as soon as the ice went from being perched perched on the bedrock to floating away in large expanses of ice debris flows. 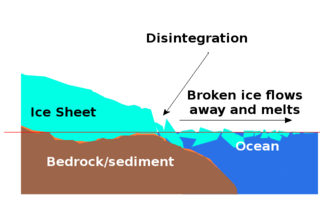 What impacts the massive flows of ice would have on climate is largely a matter of speculation. As the broken ice debris flows moved away from Antarctica, north to the continent, it is a superficial assumption to think that they would increase albedo (reflectivity) at the ocean surface in a significant way. Glacial ice, when it is free of snow cover, is actually very similar to liquid water for its albedo.

As the ice melted, since it is freshwater ice, it might create a very buoyant surface layer of freshwater on the ocean surface around it. This surface layer might be thick enough to block mixing of the ocean water from below, essentially cutting off the oxygen supply to the water beneath it. Dead zones and fish kills might break out near the freshwater "lid."

If this lid of freshwater were to form, it would also heat very quickly, and to temperatures much higher than typical sea surface temperatures. This is because the top few meters absorb most of the sun's infrared radiation, with the very top meter absorbing more than any other. This effect is quite significant, and if there were a lid - a layer of buoyant freshwater that did not mix with the water below, all that heating from the sun would stay in that lid layer. Typically the mixing in the top tens to hundreds of meters disperses the heating effect of the sun's energy.

A super-heating of the very top layer of ocean water might lead to an accelerated water cycle in the areas around the ice debris flows. That would mean higher humidity, more rain, and increased atmospheric thickness. Large storms would likely ensue as the anomalously thick sections of atmosphere moved with global circulation patterns and merged into much thinner sections.  Very heavy rainfall/precipitation would be expected from such storms.  In fact, it could be unprecedented rates of rainfall.

Such an accelerated water cycle would transfer heat from the super-heated lid layer to the air, and lead to not just a rise in global humidity and storminess, but also a rise in global air temperature of some extent.  Even small increases (i.e. one degree Celsius) in average temperature can have very negative impacts on farming yields and general drought conditions.

Perhaps worse, in the winter as the sun's energy input wanes, the ice might be massive enough to significantly cool the ocean lid layer.  Since rainfall generally falls when moist air cools, the inclination might be for more rain to fall over the cooler ocean surfaces (similar to, but more intense than the trend that is developing now with global warming to-date).  So even though total global rainfall would increase under this scenario, an increased percent of rainfall would be falling over the oceans vs. over the land.

To the best of my knowledge, no one has modeled and published their results of the West Antarctic ice sheet disintegrating and the debris floating off to influence global climate.  We know that similar events have happened in the past however.

Such events are called Heinrich events, of which 6 are fairly well dated - the most recent being about 12,000 years ago. Atlantic ocean sediment shows distinct layering with debris from land-based glaciers deposited thousands of miles from land. The best theory now to explain the Heinrich events is that the North American ice sheets (during the ice ages) disintegrated rapidly and flowed out into the oceans, spreading a raft of ice debris across the Atlantic.

The Heinrich events would have been somewhat larger than the disintegration events threatening us today.  That is because the ice sheets of the ice ages were larger compared to the polar ice sheets that face disintegration today.

But, even considering that the Heinrich events may have been more intense than anything we face, when we look at them, we see that they were really intense.  In fact, they caused global changes to climate and ecology. Through paleo-climate proxies, a scattered impression has been assembled of some of the possible impacts from the Heinrich events. The record as I am aware of it, is fairly sparse, and leaves many of the specifics open to interpretation.

As I interpret the record, rainfall and storm intensity increased for some areas. Other areas, like Asia, saw major droughts. Ocean circulation patterns changed and reorganized themselves. The oceans acidified. The sea surface did indeed become much fresher (less salty), and for several  hundred years too. Temperatures may have also fallen in several areas of the world.

This last point begs the question, if the West Antarctic ice sheet and possibly others disintegrate, will global temperatures actually fall? If the amount of ice that flows out into the open ocean is below a certain threshold will the net effect be accelerated warming due to the mechanisms I outlined above? Or will it be a linear relationship between amount of ice disintegration and falling global temperature?

A final wild card, is the unknown volume and status of methane beneath the ice sheets. Potentially there is enough methane, a potent greenhouse gas, to cause major warming. If the West Antarctic ice shelf disintegrates and uncovers deep, carbon-rich sediments that have been deprived of oxygen for tens or hundreds of thousands of years, then quite a bit of methane could be released very quickly.

There are so many unknowns that it can be overwhelming. The bottom line however, is that any change is probably going to be deleterious to the human status quo.

What to do? Ideally, stop climate change. But realistically, it may be far too late for that, and a disintegration event may be imminent.

Therefore, as a society, our response should rationally be to prepare for the worst while trying to stop it from happening in the first place. Plans and infrastructure should be built to accommodate the ports for sudden and rapid sea level rise, possibly on the scale of meters per year, up to at least 3 meters over the course of less than 10 years. The more prepared we are, the less damage we'll suffer. At the same time, the idea for carbon emission reduction that James Hansen has put forward agrees with my understanding of how things work: he suggests a tax on carbon fuels, assessed at the extraction source and with the dividends paid out equally on a per capita basis to citizens of the country where the extraction takes place. This would put the free-market system to work towards reducing and replacing carbon fuels.

In all honesty, I would be surprised by any action of any significance to address climate change on either end: preventing it or dealing with it. Such is the lesson of history. From Noah's flood to the financial crisis of 2008. Disaster strikes before the public takes the warnings seriously. Coincidentally (or not?), the most recent Heinrich event - the one about 12,000 years ago - fits fairly well with the story of Noah. A lot of rain, i.e. like never before, and then sea level rise. After the rain, a new home on higher ground.

further reading: realclimate.org covers the Antarctica warming news with an excellent inside perspective

I have been trying to keep abreast of Ice sheet dynamics research in Antarctica. Here are several useful posts from my blog:

1. Global Warming in Antarctica: Thwaites and Pine Island Glaciers accelerating, West Antarctic Ice Sheet losing mass - At the end of this article there is a 23 min video of David pollard which features a reconstruction animation of the collapse of West Antarctic ice sheet in the Cenozoic.
http://takvera.blogspot.com.au/2011/11/global-warming-in-antarctica-thwaites.html

2. Waking the giant: Global Warming in the Weddell Sea, West Antarctic Ice Sheet and sea level rise - Even from the Weddell Sea side, the ice sheet may be susceptible to ocean warming of the ice shelves
http://takvera.blogspot.com.au/2012/05/waking-giant-global-warming-in-weddell.html