The Rise of Rogue Superstorms 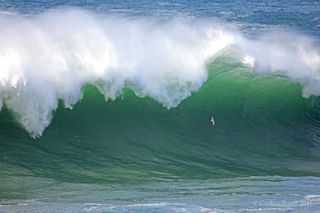 The Rise of Rogue Superstorms

Hurricane Sandy, aptly dubbed ‘Superstorm Sandy’ by the media, brought unprecedented destruction to cities across the eastern United States. The storm was not only unique in ferocity, but went rogue, bucking the typical path of Atlantic hurricanes and heading inland, pounding populations along the East coast with intense winds and flood-inducing levels of rainfall. As many cities and towns are still scrambling to repair damage, the reality is, storms like Sandy are no longer an anomaly, and they will continue to occur with increasingly regularity. (photo credit: Kristina Rinell)

Rising global temperatures are generating conditions under which storms will develop more frequently and with new-found intensity. 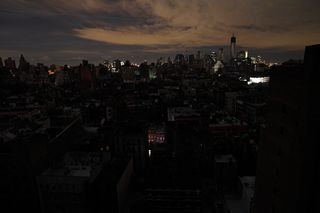 Lower Manhattan without power after Sandy's impact. (credit: ccho)
Hurricane Sandy is only one among of a number of extreme weather events occurring around the world in the past decade. In the United States, devastating floods hit Nashville, Tennessee in 2010. The Southwest drought and heat waves of 2010 and 2011 spread to encompass most of the American corn belt in 2012.

Extreme conditions in the earth’s atmosphere are contributing to the emergence of not only violent ‘superstorms’ but to an array of severe weather. The National Climactic Data Center (NCDC) has demonstrated an increase in air temperature at the earth’s surface of 0.9 °F since 1970 coupled with an atmospheric moisture level which has also risen by 4% since 1970. As the global air temperature has been rising, more and more water has been evaporating from the oceans. Imagine the steam that comes off of a boiling pot of pasta. Temperature and evaporation are directly related. More heat means more water content of the atmosphere.

It's this hot moist air that fuels storms like Sandy. As the water content continues to rise, our atmosphere is going to keep throwing stronger storms with heavier downpours at us.

Global climate change has also raised sea level along the Atlantic coast over the past century, allowing Sandy's storm surge to be that much worse. In many coastal areas, it is just a few inches of elevation that make the difference between flooding and staying dry. Globally, the oceans are rising at an annual rate of 0.6 to 1.0 millimeter, while along the US Atlantic coast, the rate has been 2.0 to 3.7 millimeters annually. Some of the most heavily populated cities in the country are along this stretch of the East coast, including Boston and New York, and it is estimated over a million people live less than five feet above the line of high tide in the Northeastern United States.

The massive amount of rain Hurricane Sandy produced, even as the storm swept inland, is also closely tied to warmer temperatures. The increased moisture in the atmosphere which fueled the driving rains unleashed by the storm was generated by warmer sea surface temperatures.

Temperatures along the east coast of the United States have been recorded as being more than 3 °C warmer than average for the region. The capacity of the atmosphere to hold water increases by 7% with each degree Celsius, therefore higher temperatures allow for more moisture, intensifying the amount of rainfall produced. The increased water vapor and warmer ocean temperatures also prolonged the duration of the storm, allowing the storm to maintain power as it moved north into cooler Atlantic waters.

Much of the devastation caused by Hurricane Sandy was a result of the storm’s rogue path inland rather than back out to sea. Communities in New Jersey and New York have not seen the hurricane-associated devastation experienced by storm-hardened southern-state residents, and so they were especially unprepared. Hurricanes with a trajectory toward the Atlantic coast in the U.S. are usually driven by westerly winds, which contradict the east to west blowing winds associated with the tropics. Hurricanes caught in the westerly winds at the latitude of Florida are redirected northeast, returning to the Atlantic instead of continuing inland. In the case of Hurricane Sandy, troughs in the jet stream which counter the west to east flowing air of the upper atmosphere shaped the course of the storm, causing Sandy instead to head from southeast to northwest, coursing inland instead of back to the Atlantic. The last hurricane to hit inland New Jersey was over a hundred years ago, termed the Vagabond Hurricane that hit in 1903. 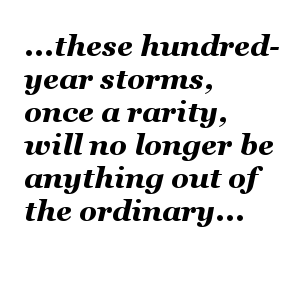 The naming of an inland wandering hurricane to represent a contrary figure, a vagrant, a drifter, something out of the ordinary, may reflect a reality true of 1903 New Jersey, when the Vagabond Hurricane struck. However, the emerging fear is these hundred year storms, once a rarity, will no longer be anything out of the ordinary. New York has been identified as vulnerable to tropical storms such as Sandy for over a decade, particularly as the city is just a few feet above sea level, and admittedly unprepared for a storm of Sandy’s power. As global temperatures continue to rise, the conditions for superstorms like Sandy will continue to worsen, systematically forming an increasingly dangerous climate.

from this site:  Everything Sea Level Rise

from Climate Denial Crock of the Week: "In for an interesting Fall and Winter"

Below is an incomplete list of recent climate-related disasters.  Know of others that should be included?

2012 North American Drought; on-track to be costliest US natural disaster in US history