Global warming is melting the Greenland and Antarctic ice caps at ever quickening rates. And ice scientists (glaciologists) are worried. James Hansen, a lead NASA scientists who has been publicly warning about climate change for decades, says that sea level rise caused by ice sheet disintegration will be severe this century. 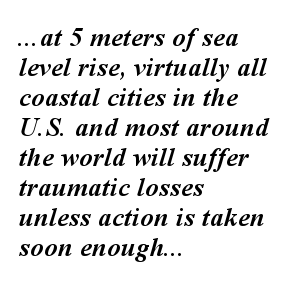 Hansen has testified before Congress over the decades and given clear, explicit warnings. He's also made many public statements and even was arrested in front of the White House protesting the Keystone tar-sands oil pipeline last year. Hansen warns that the ice caps will not melt so politely as many of his fellows in the scientific community have been assuming. He warns that the ice sheets will melt “explosively” and that rates of sea level rise could reach (and possibly exceed) an average of 1 meter (about three feet) per 20 years, equal to 5 meters per century (16.4 feet per century)!

Until a recent collaboration, glaciologists haven’t been sure just how fast the mile-thick sheets are thawing — and if Antarctica was even losing ice on the whole. Three different indirect methods of measuring ice loss were being used – flow rate off the ice, elevation change measurements at the top of the ice, and gravity readings. The new collaboration is made possible by a lengthy collection of gravity data. The other two methods were plagued by an insufficient number of data points and the fundamental fact that what is inside the the ice sheet isn't always solid ice – there are holes – sometimes big ones.

The new analysis finds that Greenland's ice sheet is melting much faster than Antarctica's. Its melt rate, 55 billion tons per year in the 1990s, was recorded as pushing 300 billion tons in the 2000's. The lead author, Andrew Shepherd of the University of Leeds in England, said “It’s very clear now that Greenland is a problem.” Between 2005 and 2010, both Greenland and Antarctica were losing about 380 billion tons yearly. Considering that the summer of 2012 saw Greenland undergo melting that hadn’t been seen in at least a century, those figures will likely be higher yet for the next measurement period.

If James Hansen is right, and sea levels do rise by several meters this century, that would mean massive economic, social, and you-name-it losses. Florida alone would lose most of its real-estate. By lose, I mean the land would be under the ocean surface, i.e. no longer "land" at all. So be warned if you're considering investing in coastal property there or anywhere. And be warned also if you are considering any kind of investment there. How the Florida economy will fare with such a sea level rise is an open question, but we can certainly imagine it could easily become a fairly horrible situation. And of course, there are many low-elevation inland areas that are connected to the coast by rivers which would also see massive property losses. Other impacts of sea level rise include salt water intrusion to drinking water, so those people who depend on well water and live within 50 to 100 miles of the coast should also take note.

Florida is just the tip of the iceberg when it comes to sea level rise.  It is the most visible location and will suffer the most extreme losses before other areas.  However, at 5 meters of sea level rise, virtually all coastal cities in the U.S. and most around the world will suffer traumatic losses unless action is taken soon enough.

All in all, this issue needs to be discussed. I would say it needs to be “discussed more,” but the discussion is at zero right now! So start talking!

For more from Fairfax Climate Watch, see our “everything sea level rise” page.

Posted at 11:34 AM in Front page, Sea Level Rise | Permalink